How Slow Can You Go ?

My friend Kurt (N4KJK) has loaned me his Vibroplex Original Deluxe Bug.

I've enjoyed my used Vibroplex Standard Bug made in the 1970's.  That bug has really grown on me and it's now my preferred key for casual operation.  But when I want to work operators who prefer speeds below 20wpm I either have to add a pile of magnets onto my already non-standard pendulum weight or switch to the straight key.

The Vari-Speed, sold by Vibroplex, gives the bug an enhanced range down from its high-speed at 30+ WPM down to about 13 WPM. 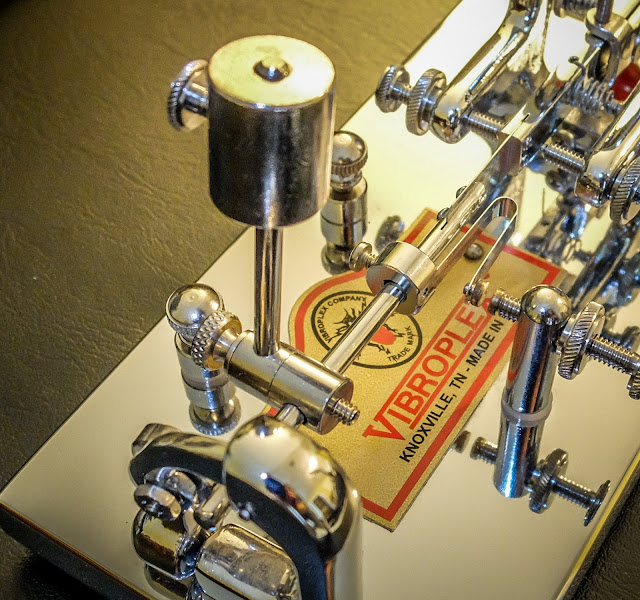 Other options exist to slow down a bug this much but they usually involve extending the weight behind the bug through extension of the pendulum tube.  I don't have room at my desk for that option, and additionally, the pendulum extensions don't allow for the bug to be returned to a QRQ speed without quite a bit of effort.

How does it perform?

In practice the Vari-Speed does its job.  It allows the DIT speed to be slowed down a ton compared to other options that don't extend the pendulum arm.

However, there are some drawbacks...  Changing speed now becomes a two handed operation.  You can't loosen the nut holding the Vari-Speed arm and move it to a new position single-handedly (or at least I couldn't) so it requires reaching over the bug and using one hand to loosen-tighten the set screw while the other hand moves the Vari-Speed back and forth.  This is a bit awkward and much slower that simply gripping the standard configured weight on a bug and sliding it forward or backward on the pendulum with one hand from the side.

The second issue, is the amount of mass added to the pendulum. It is considerable, even when the Vari-Speed is not being used to slow down DITS it makes operation feel quite different than a standard bug.  I found that my inter-character timing suffered due to the extra mass and getting the DIT arm moving for initial DIT elements of a character.   Admittedly, I've spent very little time with the Vari-Speed so I'm sure I would adapt, but I've had the opportunity to try about 6 different bugs at this point and none of them felt this strange for initiating the DITs.

Following is a video demonstrating the Vari-Speed.