The old ways are sometimes best

This is a short one.  I haven't found much time lately to enjoy the hobby, but the past few evenings I've been firing up the old Ten-Tec Century/21 and just listening to CW while I tend to other duties.   Tonight, I managed to find time before dinner to have a brief ragchew with fellow SKCC member WV8DH (Dave in West Virginia) using my old rig.  It reminded me how much I enjoy the sound of CW coming out of that radio. 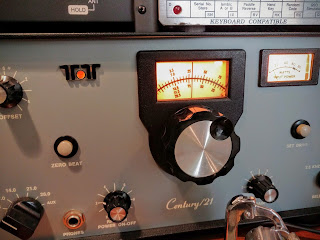 I was too lazy to set the camera up to capture the QSO, but after the QSO I dropped down the band to find a good ragchew going on and grabbed my smartphone and shot a quick comparison of the CW tone presented by the 40 year old TenTec radio and my new, modern, Elecraft KX3.

After listening to the video I realize that a lot of wonderful sound, including harmonics are not captured by the microphone on the phone and can't be heard in the video.  Nonetheless, I think you'll agree that the older rig has finer CW audio. It's certainly more pleasant to listen to for long stretches.  The KX3 audio still wears me out if I operate more than an hour.  I wrote a detailed post comparing the KX3 to the Ten-Tec Eagle last year that pointed out what I believe the culprit of the tainted audio on the KX3.  The Eagle is presently off the desk and if anything the older Ten-Tec Century/21 sounds even better than the newer Ten-Tec Eagle.

But here's the brief, badly made smartphone video comparison of the C21 and the KX3...

That's all for now.  I'm going to be reviewing a nice bug that a friend has loaned me soon.