More power to you with the Elecraft PXA100

When 5 watts is not enough

Gasp!  My blog is called "HamRadioQRP"... so what sort of heresy would lead me to post a topic on using more than 5 watts...

Will I have to turn in my QRP card?

I bit the expensive bullet and bought a used PXA100 amp for my KX3 this past week. There, I've got it off my chest.  I've come out of the closet. Go ahead and unfriend me and unsubscribe from my blog...

OK, for those still reading...

If you've been operating for the past 6 months I'm sure you've noticed the band conditions have been getting pretty poor, and while I continue to try and make contacts and have ragchews using QRP power levels sometimes I feel bad for the other fella who is not QRP struggling to copy me.

I enjoy the challenge of making contacts at QRP levels but I also enjoy exchanging more than my call and an RST.  When the other station gives me a 559 or worse, or the QSB is getting bad I want to give them a few more dB to work with.

I've written before that QRP operators can be compared to certain persons with dietary habits.  Sometimes vegetarians will eat dairy but if your vegan then you're abstain from anything that didn't grow from a root.  Well I'm more of a QRP vegetarian who will occasionally put a slice of bacon on my sandwich if I think it will improve the taste.  I'm certainly no vegan when it comes to operating QRP alone.   I've used my TenTec Eagle and TenTec C21 to go beyond 5w when the mood struck and in the case of SSB I've rarely operated at QRP levels with success so there I'm usually running well over QRP levels but I'd pretty much stuck to QRP for CW until recently.

Elecraft makes some very elegant equipment.  The KX3 by itself, running on internal batteries and with a built-in auto-tuner is an amazingly portable and full featured QRP rig.  With the newest version of firmware (MCU 2.70 / DSP 1.49, 2-27-2017) the KX3 will produce up to 15 watts of output on 80m, 40m and 20m when used with an external 13.8v power source, but if you want more than that you need an external amplifier.

I've been reading lots about the Hardrock 50 external amp and had even bid on a couple of Ten Tec 405 QRP amplifiers (which I lost) recently.  The Hardrock 50 was compelling for the price because it could be built with a full QSK option, whereas the old TenTec 405 did not have a full break in option but both would get my output up to 50 watts which is about 3-5 dB more output than the KX3 on it's own.

But my normal operating mode is to begin at QRP and if that's insufficient I turn up my power.  In the case of most external amplifiers I would be over driving them if I kept the KX3 at 5 watts input to the amp.  It would require dropping my KX3 input power to the amp and fiddle with the output until I was at the power level I wanted.

On the other hand, the Elecraft PXA100 is fully integrated with the KX3 and I can simply turn up the power knob of the KX3 and when the power exceeds what the KX3 is capable of on its own the PXA100 electronics take care of adjusting the KX3's input into the amp to give me a smooth power output up to 100 watts.  Additionally, when using the internal tuner option with PXA100 I can use two antenna outputs from the PXA100 and switch between them using the ANT button on the KX3 while the PXA100 tuner maintains independent tune memories for each antenna. It is a very slick package but an expensive one.  Purchasing a used KX3 and PXA100 together puts you well over the $2k mark which you can certainly find more full featured 100w desk radios in that price.  So for price conscious hams this is not a sensible option.  I won't argue that this makes sense from a financial aspect, but I did it anyway.  Given the vibrant used market for ham equipment I wouldn't pay new prices for these but it still comes out to be a pricey desk rig even when purchased used. 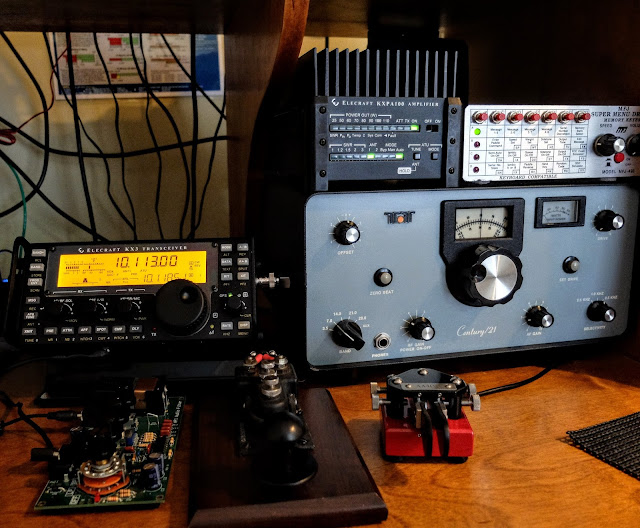 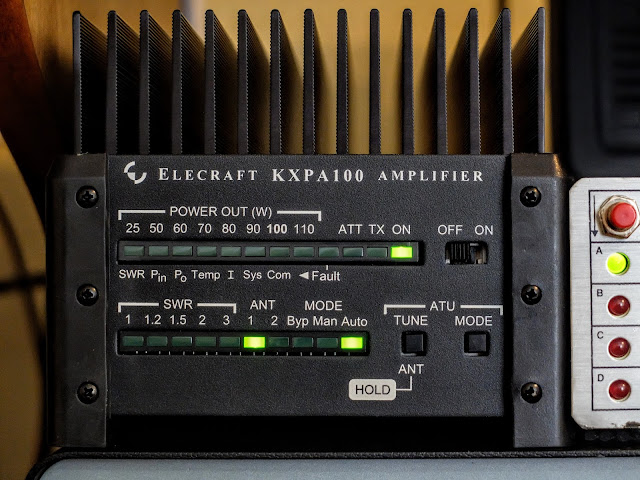 OK, back to the PXA100.  One absolutely brilliant aspect of the PXA100 when using the internal tuner option is that its tuner seems every bit as good as the KX3's internal tuner.  I think it will tune a spoon on 160m (admittedly I haven't tried that).  It has no trouble tuning my ladder line fed attic Doublet which has some serious impedance mismatches on certain bands, so being able to quickly switch between my attic doublet and my outdoor Windom has been a real boon that I don't think other desk rigs can match with their internal tuners.  I could be wrong, but Elecraft's tuners and super fast matching algorithms are pretty much legendary in the industry.

Another nice thing about the KX3/PXA100 combo is that full break-in QSK is maintained and there are no fans. My shack stays very quiet (I hate fans).  The amp has a massive finned heat sink on top that while getting quite warm to the touch has not become overheated even on extended transmissions at 100w into non-resonant loads.  I still haven't delved into digital modes but I'm confident that while the KX3 struggles to maintain its cool when used for full cycle modes at 5w and above, when used with the PXA100 this combo avoids that problem because the KX3 is only running between 2-3w intput into the amp and can dissipate its heat at that level with no problem.

So for the past week I've been using this combo and I'm quite pleased.

Here is a video that I made today in a contact on 30m where I started at 5w and moved up to 25w and switched antennas during the QSO.