It doesn't get much simpler

After dinner tonight I headed up to the shack to make a couple of QSOs.  I felt nostalgic and powered up the old TenTec Century 21 rather than one of my modern radios.

My Vibroplex Bug and Kent Hand key are connected in series and I plugged into the straight key input on the back of the C21. I tuned as near to 3550 kHz as I could determine from the somewhat vague VFO dial and listened for a clear frequency.  I adjusted the output until I was producing somewhere around 10 watts to my lovely, no-tune OCF Dipole.  This old radio doesn't have a tuner so it's nice to use an antenna that is resonant on the bands the I use.

I turned on my camera, sent my call out once and was immediately answered by Dick (WB3AVF) up in Pennsylvania.  Turns out he was using a Standard Vibroplex bug that is very similar to mine.  It was my first contact with WB3AVF and we had a nice chat.

Switching the keys around

Dick and I had a couple exchanges and then he switched from his Vibroplex bug to a straight key so I followed suit on my next exchange, using my ever so clackety-clackety Kent Hand Key.

The joys of an old radio


If you watch the video you'll note me chasing around the caller with the TenTec's audio offset knob.  I wasn't changing frequency with the VFO, I was trying to keep his signal in the audio bandpass sweet spot on the C21.  Unfortunately, my offset knob has become extremely touchy; as you can see in the video.  When I barely touch it, it will jump by a 100 Hz so it's fiddly to use.  I need to open up the rig again and find the out of spec components.  Maybe a Christmas project but I'm kinda hoping I get a new transceiver kit to build this year.  I keep planning to work on the C21 but other projects get in the way.

You can hear that the VFO drifts a bit as it warms up. That was the first QSO after turning on the radio so you'll hear after every exchange that Dick's station had dropped in frequency a bit and I was compensating with the offset knob.  He probably had to chase me about 300 Hz during out QSO while the components stabilized.

This C21 is from 1977 and uses a direct conversion receiver allowing you to hear the same station on both sides of the zero beat.  That makes for interesting zero beating...  I normally tune from a higher frequency to lower while keeping the offset set to the high side of the zero beat, about 600 Hz.  That way as I approach a signal and it's pitch decreases from high to around 600Hz I know that I'm on the correct side of the pass band.  If QRM becomes bad during the QSO I'll use the offset knob to jump to the other side of the zero beat and often that gets me away from an interfering station by moving their received "pitch" out my audio passband.  It's more complicated to explain than demonstrate.  I didn't do that during this QSO but, trust me it works well unless the band is really crowded.

Band conditions on 80m were nice tonight.  I was outputting around 10w and Reverse Beacon network showed that I had good coverage to the North which my antenna favors.

I saw decent RBN spotter reports even though I was using low power and my antenna is compromised for 80m use since it is only 25 feet above ground at it's apex and slopes down to 10 feet AGL on the long end of the OCF.

You can see that one report was as high as 34 db over noise and 9 reports were 20+ db over noise range, so not too shabby for the poor solar cycle and low power.  There were some faint static crashes, which are frequent on 80m especially in the summer but they weren't bad tonight.

I really enjoy the 80m band in the winter for ragchewing in the evenings. Other than QRN it's much lower band noise for me and not as busy as 40m.  I can use my older radio without trying to dodge QRM from close packed stations. 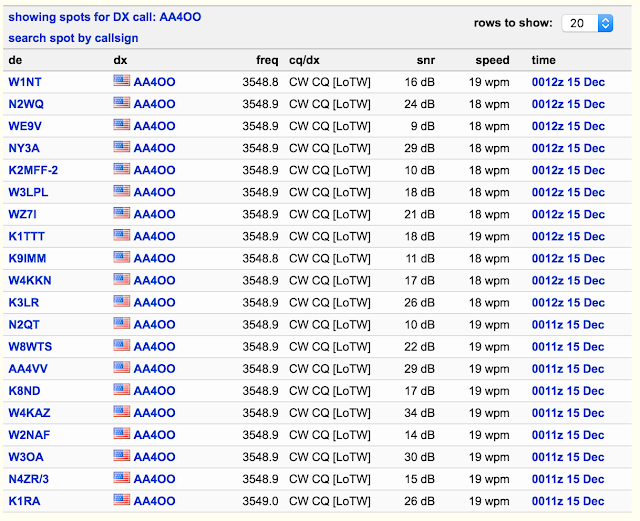 Right after the first QSO was over I was called from different station, also in PA, and that operator was also named Dick.  So it was an evening of QSO coincidences.

Make some calls and see how many QSO coincidences you enounter.

I'm glad I had the camera rolling when WB3AVF answered my call.  I enjoy listening to a two-way Vibroplex bug QSO.  I know the copy is a bit rough in a couple of places since I had not warmed up prior to the QSO. I normally need 15 minutes or so of time with my bug to smooth out my sending, and that didn't happen tonight.  If I can make the time, I'll add a transcript. Or if someone wants to send me a transcript of this QSO I'll give them full credit and include it here.

So lower your power and raise your expectations... (and use old crufty radios)

UPDATE:
I've added a video detailing operation of a Century 21...