I get some strange enjoyment out of using my 1977 Ten-Tec Century/21 CW-only novice rig.  It is a primitive radio for QRP(ish) CW operations but it has a charm that keeps drawing me back.  Maybe I just like to take the road less traveled.

It has a charm but something had to change

If you've previously read my blog you'll recognize one of my nits about the Ten-Tec Century/21 concerned its sidetone.  The same quad op-amp LM3900 chip is used for both the audio filter and produce the buzzy, square-wave sidetone.  The side tone pitch is fixed at 475 Hz while the audio selectivity filtering is centered around 750 Hz .  The sidetone volume on the C21 is adjustable but the pitch is not.  The later model Ten-Tec Century/22 offered adjustable pitch for the sidetone.

I had learned to live with the obnoxious sidetone and somehow even appreciated its novelty until I built an Elecraft AF1  kit to tighten the audio-bandpass filtering for this radio.  The Elecraft AF1 does its job very well; so well in fact that when zero beating a CW signal it results in the audio peak pitched at 750 Hz (the natural center for the C21 audio filter), the external Elecraft audio filter in its tight filter mode then filters out the sidetone which is pitched a few hundred Hz below the CW audio signal.  That means that while my AF1 filtered the incoming CW wonderfully and provided much better selectivity than that provided by the C21's built-in filter, I couldn't hear my sidetone when sending.  I could hear the clacking of my straight key but when using a bug I was literally deaf to what I was sending.

I got around this problem temporarily by using my HAM Keyer as my key interface to the radio and listening to the sidetone from its external speaker (keeping one side of my headphones ajar).  Well that quickly became bothersome; both to me for having to wear my headphones askew, and to family members within earshot of the external keyer's audio.

So I decided I needed to change the pitch of the sidetone to match the 750 Hz audio center of the CW filtering built into the radio.  Doing so would allow my external bandpass audio filter to pass the sidetone at the same pitch I'm listening to received CW.


A kind ham (WA4FOB) sent an email suggesting that I modify the op-amp circuit generating the sidetone.  He told me that I needed to change the resistance of R1 in the 80356 audio preamp  schematic.  But apparently Ten-Tec made some running changes to the pre-amp audio board because quite a number of resistor values on my board didn't match the values listed in the schematic. For example, the schematic showed R1 as a 68K resistor but no such resistor with that value was on the board.


A bit of detective work was required..

The 80356 preamp audio board is directly connected to the AF and Selectivity knobs on the face of the radio and removing the board turned out to be more difficult than it should be (longer story not recounted here).  So without the ability to trace the circuits from the bottom of the board I had to determine the correct resistor to modify by tracing it backward to the correct pin on LM3900 by measuring resistance between components.

Op-amp schematic for the TT-C21 sidetone


R1 on my radio turned out to be a 47K ohm resistor rather than the 68K value indicated in the schematic.  I knew that I needed to lower it's resistance to cause the tone generation to raise pitch so I tested a few resistor values before settling on a 33K ohm resistor to be used in parallel with R1.  That gave me a resulting resistance value of:


A resistance of 19387 ohm results in the sidetone pitch generated by one of the LM3900 op-amps very near my goal of 750 Hz.  The sidetone pitch now lies within the bandbass of my external filter and matches the received CW natural volume peak at 750 Hz. Another benefit of raising the pitch  has been to smooth out the brassy square wave.  It is now quite pleasant to listen to.  I may miss that old buzz-saw sidetone...  Nah, I won't.

All-in-all this was a fun little bit of detective work for an electronics novice such as myself.  I am quite satisfied with the result of this simple modification. 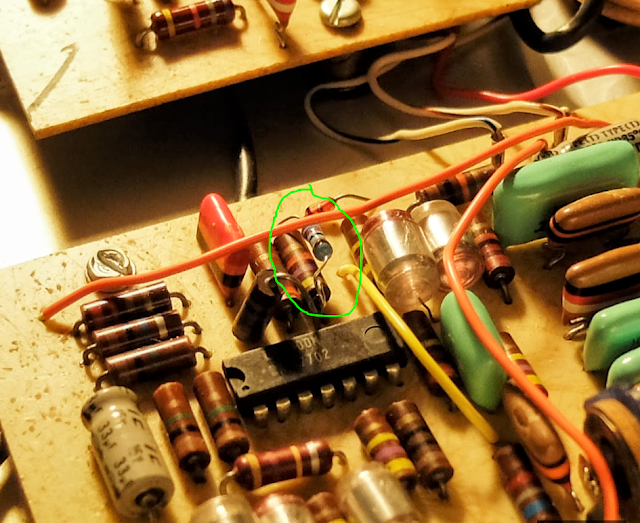 I must admit that even though HAM radio has historically had a strong focus on electronics my background is completely devoid of working with electronics.  I was simply an "appliance user" of radios. But purchasing this old, inexpensive radio has been a boon for learning about a subject I should have studied long ago.  When I bought this radio it had a number of quirks.  The radio arrived with previous owner(s) modifications for driving an external amplifier and other "features". Some of those modifications negatively impacted both the QSK and the drive adjustment.  I spent hours studying the schematic and probing around the radio before I determined what to remove to get it back to a more factory-standard state.  It has been a great learning opportunity.  Since the radio was relatively inexpensive I am not too concerned about breaking it and the circuitry doesn't get much simpler in a transceiver than this.

Pick up an old clunker to mess around with

My little investigations under the covers of this rig have encouraged me to consider building something more complicated than the regen-radio and audio filter kits that I've built to-date.  Without the Ten-Tec C21 I don't think I would have the confidence to move forward in my nascent journey into the world of electronics.

If you are an amateur radio operator who, like me, is a total novice at electronics consider picking up an older solid-state radio such as this one just to learn about electronics and experiment on.  I think it will encourage you to learn more and become a better ham.

But as with all things that run on and generate voltages that can maim or kill, go slow in your learning process and take precautions to keep yourself and bystanders from injury.

Lower your power and raise your expectations