I've been working a lot of SKCC CW stations during the holidays and adjacent stations really interfere with my ability to use the vintage Ten-Tec Century/21.  Its built-in audio filter is relatively effective if the band isn't too crowded but if I'm working a station and others pop up within a 1kHz on either side I have a real hard time keeping track of which QSO to listen to.  I wanted some relief from the relatively porous audio filtering provided by the old girl.

A kit from Elecraft seemed to be the ticket to better signal isolation for my old radio.

This kit is about $60 and is pretty easy to build  There are a couple of ICs to solder so it will be easier if you have a temperature controlled, fine tipped soldering iron. Santa brought me a nice soldering iron for Christmas so this was my first chance to make some use of it. Everything about the kit is very straightforward and Elecraft has wonderful build instructions along with a well laid out board. Their instructions list components in the order that you will be installing them on the board, left to right and even include the color coding or numbering for resistors and capacitors right there in the instructions so you don't have to keep going back to look up the coding.  I've only built one other kit previously and the Elecraft instructions are better.

My only gripe is that this kit has been out for quite some time, but for some reason they shipped me a Version "A" board that required a trace to be cut and a couple of jumpers installed to correct a board error.  I would hope that they would ship new versions of the board but apparently you can get an old version.  Next time I order a kit from them I may specify that I want the latest revision of the kit.

The board powered up and worked right as the last of the solder smoke was wafting away.  I connected it to the Ten-Tec and tried to find some adjacent station operations to test against but the bands were not terribly busy tonight. I did manage to get a decent audio test on a calling station and created a video to demonstrate the board's capabilities.

This is the first kit I've built from Elecraft.  It was a simple one.  The instructions were excellent, the silkscreen layout on the board was straightforward and all the parts were in the bag.  The kit does not come with an enclosure so it looks a bit unfinished and the knobs are a bit wobbly on their tall, plastic shafts.  That is my only negative concern regarding the finished kit.  Putting it in an enclosure would also require the battery holder to be moved to the bottom of the board to clear the shafts exiting the top of an enclosure.  Certainly not a big deal but I would be willing to pay an extra $10 for a ready made enclosure because when I've tried to make them they look like junk.

But the bottom line is that if you have an older radio that lacks good filtering or you've built a homebrew radio that you want to be more usable on the air, the Elecraft AF-1 is an excellent addition.  I think it is going to serve me well with my vintage radio.  Now to find a project box to fit it. 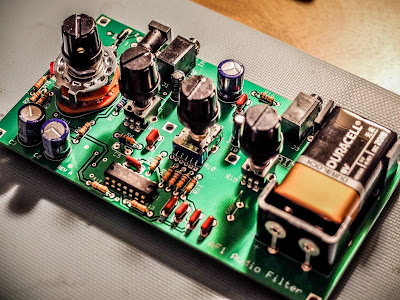 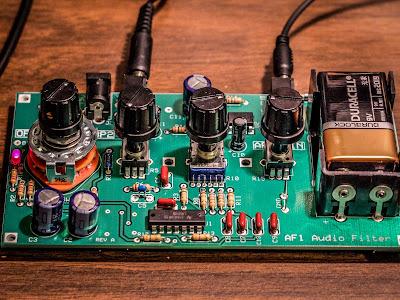 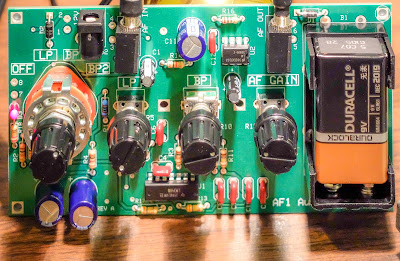