I've been interested in getting my hands on a Hallicrafters HA-1 since the first time I saw one online.  A 60 year old (as of this writing) all-tube keyer weighing in at 7.5 lbs.  Everyone needs one, right? 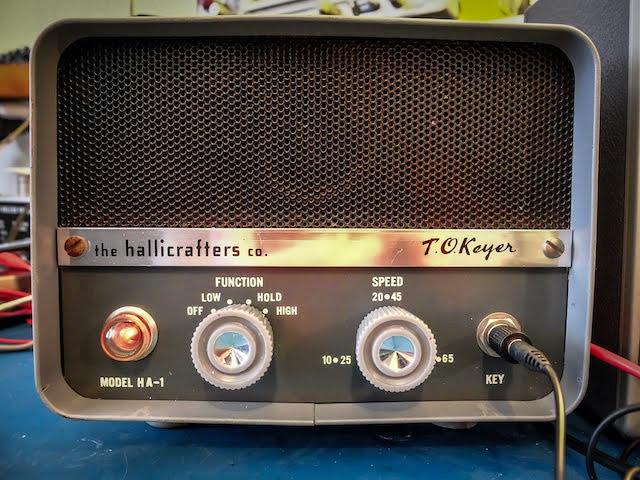 The HA-1 uses a mercury wetted relay capable of switching up to 500v circuits.  Wow!  It employs four 12AU7 tubes to perform the mark-space morse timing and uses an OA2 and OB2 tubes for power regulation. 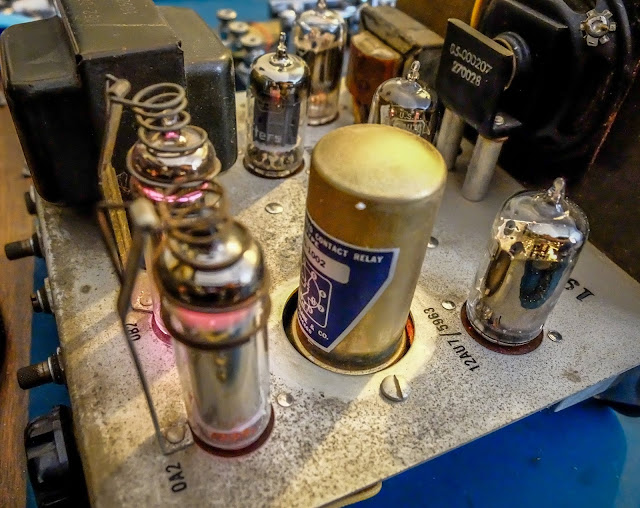 They always auctioned for more scratch than I thought was reasonable or were so beat up that I assumed it had been buried in a damp basement since Eisenhower was president.

I finally won an auction for one that was in reasonable cosmetic condition and fully expected to have to overhaul the electrolytics and out-of-spec capacitors but I lucked out and received one that had been recently overhauled with new power caps and even had replacement polys.  The only issue was the the sidetone circuit was kaput because a neon bulb used in the relaxation oscillation circuit had broken its leads at some point (maybe during shipping) and was rattling around in the case when I received it.

Fortunately I had an old neon bulb in my junk box.  It was socketed rather than having the leads, but I soldered some leads to the socket and installed it where the other had broken off.  Wahlah, sidetone audio restored. 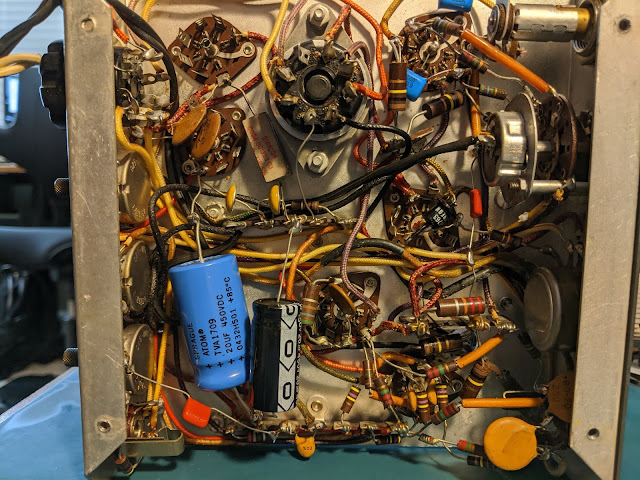 After reading the manual and adjusting the circuit balance and element weighting, I had a go with it.  I found that it kept eating a DIT when it followed a DAH in a character like K or N.  I eventually realized that I was hitting and releasing the left paddle (dit paddle) before the current DAH was completing.

A keyer without DIT / DAH memory

Then it hit me... this tube circuitry doesn't have an "memory".  Modern, digital keying circuits have a memory as to what paddle was pressed while the current element is being completed, but this old electronic keyer is using all its tube goodness to complete the timing for the current element.  So in the case of a DAH, it doesn't have a place to buffer that I've pressed and released the DIT key while it was completing the DAH.  I have to be holding the DIT paddle after it's completed the DAH for it to recognize and begin the DIT element.

That really calls for a change in my paddle usage.  My brain needs to keep in mind the length of DAHs so that I don't rush and release a following DIT before the current element completes.  This is a bigger problem below 25wpm given the longer length of the DAHs.


The Hallicrafters HA-1 manual states that the keyer is different from other electronic keyers and requires "a knack" to use effectively.  I think I've discovered whereof it speaks.

I practiced for about 30 minutes and then tried some on-air CW QSOs.  They were rough.  Leaving DITS out of K's, C's, Q's and N's and other such letters really changes what you're saying... C's become M's... K's become M's (mmm... M&Ms)  N's become T's... Anyway, you get it.  Very frustrating for both the sender and the receiver.

As luck would have it, one of the stations I worked was also using an old Hallicrafters keyer.  Did I know because he was dropping DITs ?  No, I was telling him about the "new" keyer I was using and he responded that he was using one as well and went on to extoll it's virtues.

So I plan to use it and not relegate it as a shelf queen.  I figure with enough practice it will actually improve my technique and probably improve my bug fist as well since it causes me to be far more conscious of my inter-element timing when forming characters.

If you have a good, modern keyer and don't need to key high-voltage tube gear, I can't really recommend that you run out and find a Hallicrafters HA-1.  But if your taste runs toward the eclectic and you want a really, large electronic keyer with no memory functions that consumes 30 watts of power whenever it's on and provides you with a wonderful tube smell, and also requires soldering to hook-up the line to connect to an external transmitter... then this is the key for you.

Plus it looks just like H.A.L. from the Space Odyssey 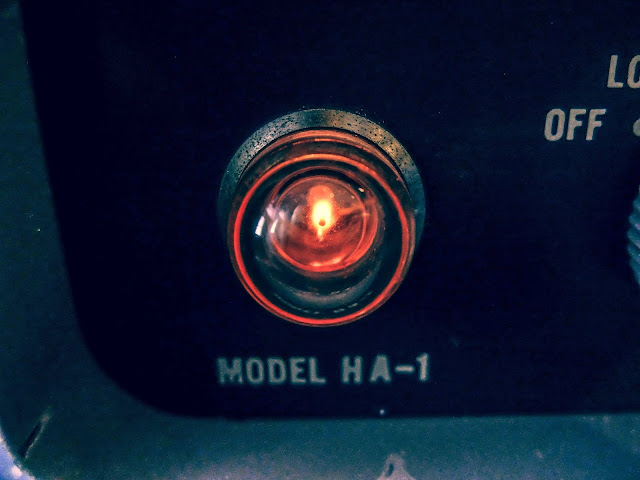 So use a keyer with more wattage than your QRP station to get those extra DX contacts.