Sometimes I needlessly struggle with a problem because I'm cheap.

For some reason I seem to have to move stuff on my desk all the time.  I guess I'm never content and constantly reorganize the station and accessories.  Inevitably I misplace a rubber mat or some rubberized shelf liner sticks out from under a key in an unsightly manner. In general it makes the station look shoddy.


Bring out the buggy bumpers

2B Radio Parts, provide replacement parts for Bugs, paddles for various makes of keys.  I ordered Replacement Vibroplex Bumpers (6 Bumper Pack).  I wasn't aware the 'feet' were called 'bumpers', but there you have it... I have new rubber baby buggy bumpers for my bug and vibrokeyer. 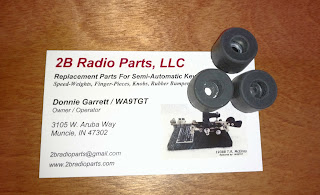 The 6 bumper pack replaced the feet on both keys.  In case you never noticed, many keys, including those made by Vibroplex, have 3 feet rather than 4.  It keeps the key from rocking on a surface that isn't entirely level or flat.

The replacement feet... err... bumpers from 2B, fit fine. They were nearly an exact match for the old feet on the 1970s bug but were a smidge taller and slightly different design than those on the 1960 Vibrokeyer.  The older key had a chambered, internal design that I'd guess had a bit more cushion back when it was new.  57 years later, the rubber foot is a brittle relic of its former self.


Ahhh, no more slip siding away

The old feet are simply held on by countersunk machine screws and the receiving holes in the new bumpers fit without a hitch.

The moral of the story is stop being cheap and buy some new feet!

P.S.   Oh, speaking of which (lowering your power and raising expectations)... I was sending out my call on 7030 unsuccessfully a couple nights ago, for about 10 minutes.  I was using my TenTec Century/21 at 5 watts QRP and getting lousy spots on RBN (6 to 9dB SNR).  I decided to keep sending CQ a couple more minutes and was finally answered by S51MF, Franz in Slovenia, 4700 miles away.  You just never know what your QRP signal is going to net you.