If it ain't got that swing, that's a good thing

The bane of those who work Bug key operators is the dreaded "swing".  Swing is when the DAH to DIT length doesn't match the accepted ratio of 3 to 1... often with Bug ops the length of the DAHs stretch out to way more than the accepted ratio and the poor schmuck at the receiving end has to make sense of someone speaking CW with a thick accent. 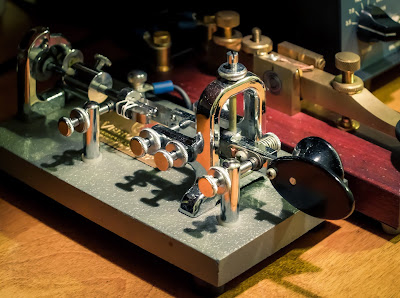 Sometimes a bit of swing on a manual key adds some interest to the sound of the CW and when Bug ops work other Bug ops we often throw some extra-spicy whoop-swing into our FIST.  But by and large non-standard DAH to DIT timing is frowned upon because, after all, we are supposed to be communicating and communication is easiest when it is understandable.

As I've been learning to send CW with my circa 1970s Standard Vibroplex Bug, I've strived to make my FIST sound as close to the accepted timing of a paddle through an electronic keyer as I can.  I'm very much still in training, as you'll hear in the video, but I thought it might be helpful to have a little show and tell.

Wow! I need practice.  After listening to my video I realized my inter-character spacing was terrible with too little spacing between characters.  So please don't run your characters together like I did...

Practicing the bug to sound like... errr well a paddle
The phrase I'm sending at the end of the video is a quote from Albert Einstein..


"The true sign of intelligence is not knowledge but imagination"

That's all for now...
So lower your power and raise your expectations, and "enunciate" your DAHs
72/73
Richard, AA4OO
Posted by AA4OO at 8:20 PM