Can anybody hear me 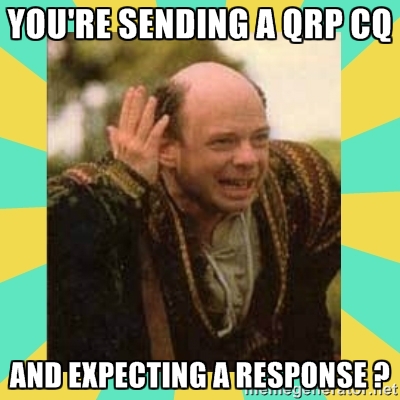 My 80m OCF Dipole has been a surprisingly good antenna and I've made contacts with it on all bands except 6m and 160m.  Based on my past experience trying to tune up short antennas on 160m I really hadn't considered trying to use this Windom for 160m.  But through some email exchanges with another ham in Illinois who had recently put up a 160m antenna we decided to try a scheduled QSO on the top band.  So it was time to give the Windom a shot on 160m.

Amazingly my 80m Windom / OCF Dipole has  4.5:1 SWR native around 1.8 mHz and it matches easily with a tuner across the entire 160m band.  That was a surprise.

Within a minute of calling CQ I had a faint QRP station from Maine tried to work me.  After about 4 tries I finally copied his call correctly but then lost him.  Immediately another station called me and we exchanged the niceties of signal reports, location, rigs and weather.  I received a nice 579 report for my 5w and I gave him a 599+ report for his thundering kilowatt station.  He needed to work my County so I was glad to be able to provide him with the contact.  Following that call the former QRP station from Maine was back in there and finally we worked each other.  We had a nice QRP to QRP QSO on the top band.  He gave me a 549 report but he was using a 400 ft beverage receive antenna.  I was struggling a bit more to copy him through local QRM on my side and a less qualified receive antenna and reported his signal as 339.

Those were my first two contacts on 160m using CW.  Who'd have thought my cloud burner antenna and QRP power would get me such quick results on the top band.  I just figured no one would hear me.

So how do you know if and where your signal is getting out ?

I had to quit right after those two QSOs but when I later checked my email the original station with whom I'd planned the scheduled QSO reported that although he had not heard me he said I was getting out and sent me a link to something called the reverse beacon net showing a couple of stations that were hearing me on 1810 kHz.

You mean I can find out in near realtime if and where my signal is being heard by an automated system? No way!  That is cooler than a Ronco Pocket Fisherman.  Recall that I'm relatively new at this stuff and this may be old hat for a lot of you.  But the ability to toss out your call and in real-time check where your signal is getting to just warms the push-pull final transistor in my heart.

The Reverse Beacon Network can give you the last 100 reports of your station. So I took a look and saw some of my weekend activity where I was shooting some fish in a barrel (I mean working contest stations) and there were beacon reports of my call from such places as far South as the Antilles and as far West as Utah.

So the reverse beacon network report tells you what station heard you, the frequency, the signal to noise ratio (higher is better) and your word per minute (wpm) speed.

It even includes a speedometer

Being a new CW dude my word per minute speed is of interest to me.  Most of my QSOs in the past week have been at 15-16 wpm.  I'm using a Vibroplex Bug I received last weekend and have slowed it down with a home-made weight attached to a drywall anchor pressed on the end of the pendulum.  I found it interesting that some beacon stations reported me at 19-23 wpm.  I looked at the time and the frequency and realized that the higher speed was from my first on-air QSO using the Vibroplex Bug with N4HAY before I slowed it down with my junk box bug tamer.
So if you are using a manual key and don't know what speed you are sending just check out a beacon to see what speed they are reporting.

This reverse beacon stuff has been around a while. So unless you're a newbie like me you probably already knew about it.  But if you haven't used before it's very cool, especially with regard to knowing how your QRP station is being heard. Are you making it 1000 mile per watt?  Is your antenna propagating East, West, North or South.  How and where is the skip?  This answers many questions that I had been wondering about as I'm operating.  A shiny new toy, just in time for Christmas

So that's all for now.