Can a Straight Key really Coexist with a Paddle ?

The Harmony of the Keys

exist at the same time or in the same place.

Can a Straight Key coexist with a Paddle?

Ok, so I have my nifty 1977 Ten-Tec Century/21 and it has one CW key input and of course at its age it has no built-in electronic keyer, so no paddle for you buddy.  I like to switch back and forth between a paddle and a straight key during a QSO so I went looking for an electronic keyer that would allow me to have both types of keys attached at the same time without touching any switches or controls.  Some people simply plug both keys into a Y-Cable and then switch the keyer on in the radio when they want to use the paddle but I switch frequently enough to where I don't want to have to change any settings and I especially don't want to go into a menu (I'm a confessed menu hater).

This electronic keyer dates somewhere between 1975 and 1985. The St. Louis Ham Radio Center primarily made and sold keys, both paddles and straight keys that were knock offs of the old Brown Bros. keys.  One of their models was a "dual-key" with both a paddle and a straight key on one base so I assume that with this in mind they created the HK5A with dual-inputs allowing both a straight key and a paddle to be attached simultaneously.  The HAM KEYER uses the clever Curtis 8044 keyer chip which is long out of production.
This keyer has no provision for memories but I don't expect to do contests with the old Ten-Tec and my memory is still fine so no worries... mmm,  now what was I saying?
The HK5A has a sidetone speaker with a volume and pitch (tone) knob.  It's not terribly unpleasant sounding, certainly no worse than the square-wave sidetone of the Century/21.  Maybe I'll set it five semitones lower than my Century/21 for some sidetone harmony.  The keyer weight knob has an enormous range and can turn your DITS into longer DASHES than the DASHES themselves so just a dab will do ya on that one, some component is probably out of spec inside the old boy.  The far right knob turns it on/off and lets you turn side tone on (with Tone) and the last position is key-down for tuning without touching the key.
So it's a fairly normal keyer with the added bonus that it has outputs for both direct keying and grid keying for older rigs with high plate current, that is assuming you don't want deadly voltage on your key.

On the back of the keyer you can see the outputs for grid and direct keying as well as the inputs for the straight key, paddles and a funky 2.5mm T/R 6v power supply plug.
It can also be powered by 4 internal C-Cell batteries which I've read last for ages so I went with that option rather than deal with RFI in one of my 6v wall-warts.  If it turns out to be power hungry I'll put a different plug on one of my old 6v wall-warts and try to choke it sufficiently to keep it RF free.  Best of all these old keyers come up frequently on auction sites and usually sell for very little.  I got mine for $16 + postage.
So the HK5A HAM KEYER is the ticket to key coexistence. 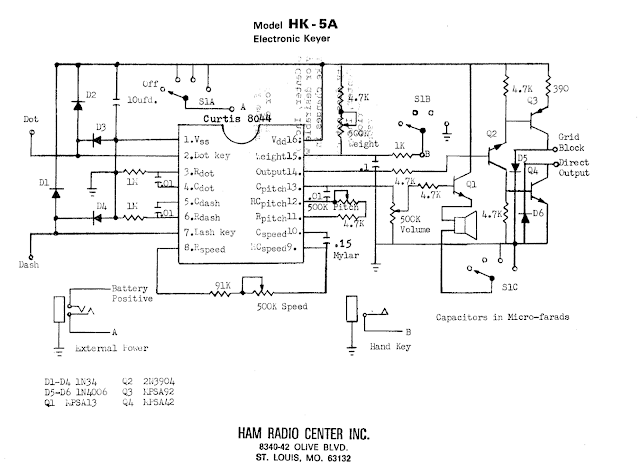 There is another option for wiring manual keys together with an external keyer that only has a single key input.  You can wire in the manual key(s) in parallel with the output of the keyer.  So you could use a Y-Cable at the output of the keyer and then the transceiver would be triggered by the keyer when a paddle is used and also be triggered when a manual key when it is used.  The only real disadvantage is that you cannot use the keyer for sidetone of any keys that are wired in parallel with its output.
If you are using a rig with an internal keyer and only one key input there really isn't an option for two keys at once without changing a setting in the rig, that was the genesis of this article and the sister article for the KX3 two-keys-at-once.
That's all for now
So lower your power and raise your expectations
Or the way my posts have gone lately I should say "So purchase your grandfather's era equipment and lower your expectations, hi hi"
72/73
Richard
N4PBQ
Posted by AA4OO at 6:45 PM