Review of the Kent Hand Key 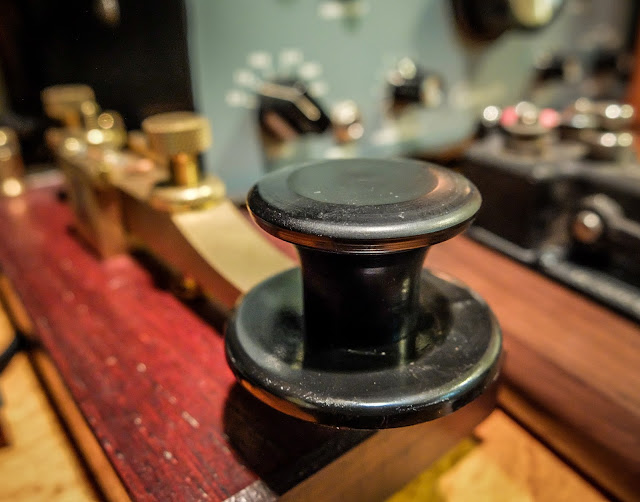 I've had a week to appreciate the Kent Hand Key.  I am in no way an expert on straight keys since the only "straight key" I've used before was my junky, pressed steel, MFJ practice key.

Here is the Kent sitting in front of a MFJ practice key...  Maybe I'm compensating for something...
I had used my MFJ practice key on maybe 10 actual on-air conversations.   It wasn't confidence inspiring due to its mushy, wobbly nature.  However I can draw some comparisons.  The MFJ key is closer to an "American" style key where the knob is low down and flat where the operator rests their forearm on the desk and operates via the action of their wrist.  I spoke with proprietor of Morse Express at length when I was ordering my Palm Single Key regarding what type of Straight Key / Hand Key he recommended and his preference was for the European style of key such as the Kent.

This article (What are American and European “styles?”) from the Morse Express website goes into great detail concerning the differences between the European and American sending styles as well as the difference in keys used.  To summarize, having the key low and operating from the wrist was found long ago to cause wrist injury after extended use.  In response to this; side operated keys such as the Vibroplex Bug and "Cootie" side-swiper were introduced.  The Europeans took a different approach by raising the key and operating it from the edge of the desk such that the operator's arm is in free space and the action of the wrist is greatly lessened as it transfers to the arm and shoulder.  The difference in styles requires different motions of the hand and arm.  Some people prefer one over the other and some just like to switch between them as the mood strikes.

I looked at a lot of different straight keys on the web but didn't have the opportunity to try any in person.  I chose the Kent mainly because I wanted the European style and I just liked the way it looked.

I emailed Robert Kent at Kent Engineering and asked him questions about the Kent Hand Key. I wanted to know the age of my key and the type of wood used in the base.

The base is wood, obviously, but I couldn't determine the type.  Even after all these years it's quite fragrant, especially when the bottom cover is removed.  Robert Kent told me they used all manner of woods over the years, basically whatever was available so who knows.  It smells like Walnut to me but I didn't think Walnut was plentiful in England so it's probably something else.  The wood base is weighted internally with two steel bars in a hollowed out section covered by the base plate.  It weighs about 2.2lbs (1kg). 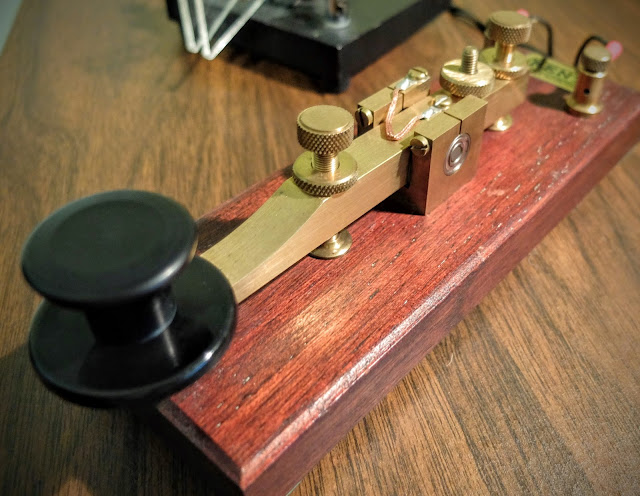 Kent Keys were manufactured in England  from 1983 until around 2006, after which they contracted out the work to a firm in Germany.  As best as I can determine from Robert, keys such as mine with the continuity strap on top were manufactured in England.  Those with the strap on the bottom were kitted or made in Germany as is the current model.  These keys look very similar to the type used to send the SOS on the ill fated Titanic.

The terminals are wired internally under the base plate to the posts at the rear.  The post have knurled knobs for securing either eyelets or bare wires into holes in the rear of the post.

The anvil and striker are heavy duty and produce a "clack" in operation duly amplified by the wooden base.  Some reviews on eHam find this a real detractor and if I operated within earshot of my family they would likely not appreciate its music as much as I do.

The business end of the key is solid brass with a brushed finish.  This key is at least a decade old and the finish has held up well.  The arm is SOLID stuff, no bending is going to occur no matter how HAM fisted you are (pun intended).

The sealed bearings are sturdily secured to the frame.  There is absolutely no side-to-side motion as the key is being used.  Tension is maintained by a spring in the base that pulls down on the rear of the bar.  This keeps the bearings tensioned more evenly than a pusher spring in the front would (from what I read).  All the adjustments use finely pitched screws with knurled knobs.  It can be adjusted to an extremely small gap and tension can be adjusted from a butterfly's wing to longbow pull given the leverage of the spring.  The larger the gap of course the more cacophony the key makes in operation.  As my form keeps changing I find that I keep adjusting it to fit.

The "Navy Style" knob is a two piece hard rubber monster of a thing.  When my key first arrived, the knob had oxidized with some white discoloration but oils from my hand have turned it dark again. It is very slightly dished on top with a good height for a proper grip. Some people seem to like to replace the bottom section with a poker chip but I don't think I'd want that to be rough edged. 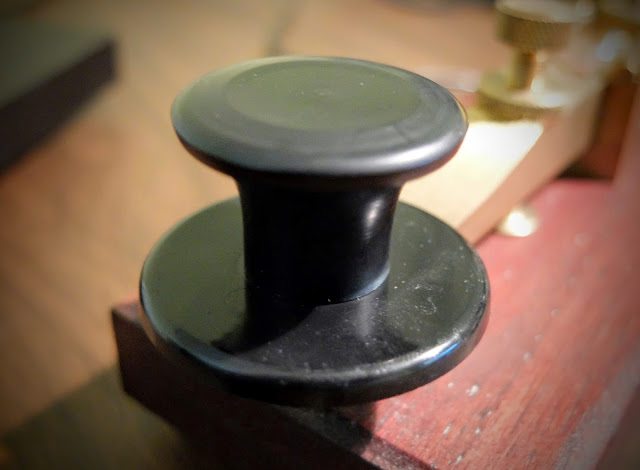 The base plate is sturdy metal, covered with green felt/blaze.  The screws secure the rubber feet and plate to the base.  Removing the plate gains access to the wiring and screws securing the components and bar holding the spring. 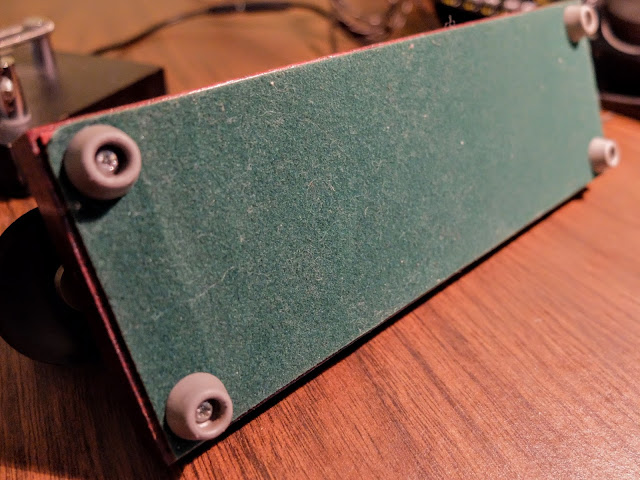 Alright, I'm admittedly no expert in these things but I have to say that I'm very pleased with this key.  All my contacts this week have been made using this key and it's beginning to feel like an extension of my arm.  I'm very pleased.  The only negatives I can find with it is the racket it makes in operation but with headphones on or the sidetone turned up it's of no concern to me and for some reason I'm growing to like the noise.  If you operate in a room adjacent to family members it may cause some consternation.  Also of concern is it's size and the operating style requires you to have it near the edge of your desk, so if you're not willing to dedicate that space it wouldn't be right for you.  It is also larger than my KX3 radio so I certainly wouldn't classify this as a "portable" key however I'd have no concerns over its durability for transport.  You could probably throw it in your trunk and take a long trip without any wear for the worse on the Kent.

I do plan to eventually try some other keys.  Junker's seem to be popular choices as well as Nye's.  I briefly tried a friend's Vibroplex Bug and don't feel that it's a good choice for a new CW operator (at least for me).  I've also tried using my Palm Single as a side-swiper and that's not natural to me either.

Lastly here's a video I already posted of a QSO I made using the Kent Hand Key.  It will allow you to hear its "clacking" albeit at a slow speed.

So Lower your Power and Raise your Expectations